Back in 1997 I was negotiating my salary increase as Regional Manager with my new boss. I had survived five (5) mergers and acquisitions and was in another one. My new boss was exceedingly smart, and while at Harvard, he was the captain of the debate team. Our first discussion about my potential raise was a crushing defeat for me. He was a good leader and good man, but to get anything from him, one had to build a sound case. Being the relentless soul that I am, I went back into the fire and demanded a face-to-face meeting in North Carolina at his office. So, I flew up to meet with him. Truth be known, I was totally unprepared. Through fortune and blessing, after arriving at the airport, I met a stranger at dinner the night before the big meeting. The story is quite an interesting one, but for this posting, I will not go into much detail. This stranger could tell something was on my mind and asked me what was bothering me. I told him I was in town to meet with my boss, who was a true badass, to build my case for a compensation increase. To my complete surprise, this gentleman asked me if I had ever heard of The Razor™, and proceeded to share it with me on a napkin. We put together an argument. I was blown away.

The Razor™ is simple in theory, but not so simple to use effectively. With practice it is a powerful negotiation and debate tactic. It takes three (3) well-conceived and simplified points, and plays them in a relentless repetitive manner.

The short end of the story is that I used The Razor™, however weakly I could the first time, and was able to stalemate my brilliant new boss into a tie. I knew it was working when he called for a break, relaxed for a while and then came back at me hard to beat me. I played The Razor™ as best I could. We agreed to a raise! My boss was impressed that I came to town, bellied up to his desk, and held my own in a respectful, unemotional debate. He was still the superior businessman and debater, but I held my own. We both left feeling hopeful about each other in our new relationship. I was managing a big chunk of his division.

Let’s look at The Razor™: 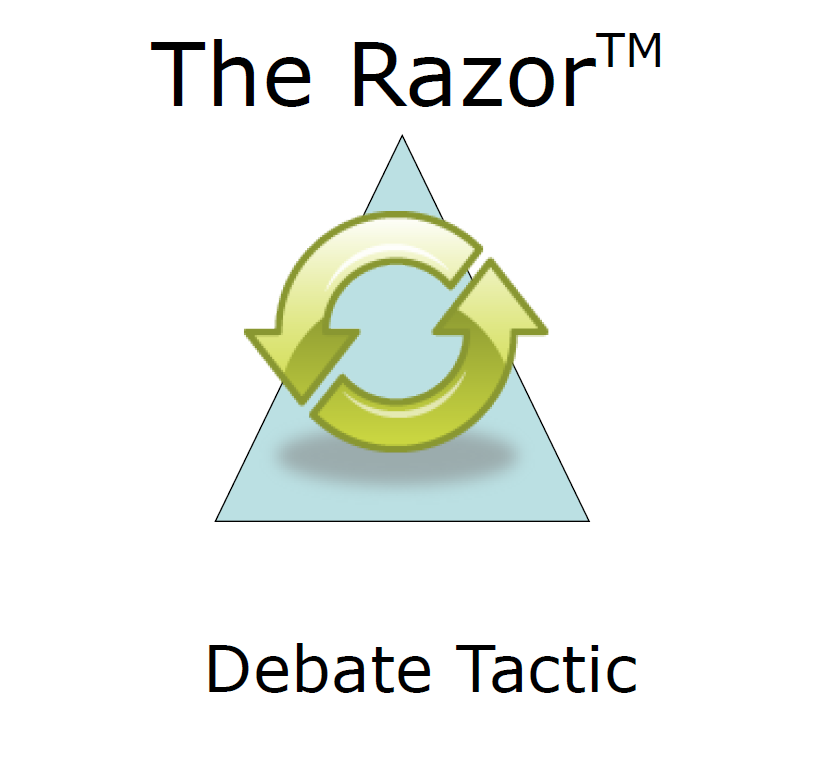 The Razor™ is simple in theory, but not so simple to use effectively. With practice it is a powerful negotiation and debate tactic. It takes three (3) well-conceived and simplified points, and plays them in a relentless repetitive manner. The skill required focuses on:

This is important because it is very tempting in arguments and debates to get off on pig trails and get off your game. The discipline here is to play your three points in random order in reinforcement of each other.

How to Use the Razor:

The Razor™ is only as effective as our mastery of the three skills listed above. If we take time to really develop a solid tip of The Razor™ that is impactful, resounding and simplified, then we are off to a good start. Each of the base points needs to strongly reinforce the tip of The Razor™ and be resounding and formidable as well. Once the three points are conceived, simplified, and we have practiced their effectiveness together, then it is ready for use.

In leading my executive teams over the years, and in coaching great leaders and executives now, The Razor™ has rendered some amazing prowess for my leadership teams. It is effective in personal and business settings. It is important to note, though, that it does take some coaching and practice to get fluid and smooth with The Razor™. I have taught individuals and teams, alike, how to learn this methodology and how to leverage it for good and right in the world. I have found it to be an amazing arrow in the quiver for top executives.

Happy Spring! Until next time, cheers!